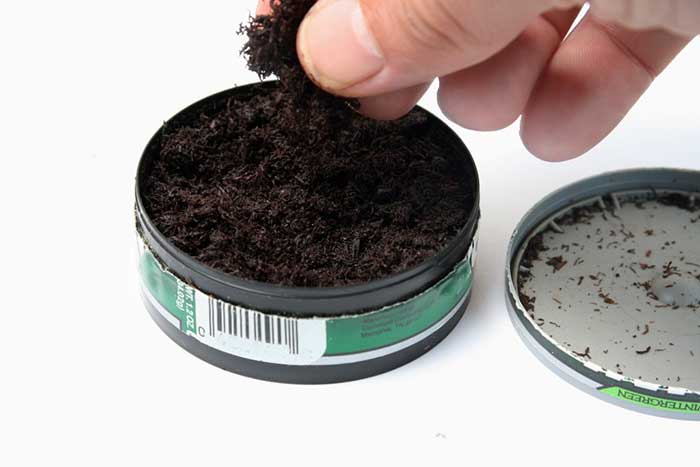 Dip, chew, chew, plug, snuff, chewing tobacco? smokeless tobacco goes by many names. There are products now that are made of compressed tobacco powder that emulate a dissolvable candy-like consistency. Smokeless tobacco is highly addictive no matter what it’s called and is detrimental to one?s health. At Cooley D.D.S., we want you to be aware of all the harms that smokeless tobacco can cause to your oral health and your overall health.

Smokeless tobacco products contain a variety of toxins associated with cancer, just like cigars and cigarettes.

Despite the fact that the use of cigarettes continues to decline, smokeless tobacco usage has? increased since 2000.

There are upwards of 28 cancer-causing chemicals in smokeless tobacco, according to a 2007 study by the World Health Organization?s International Agency for Research on Cancer.

Tenderness, burning, sores that will not heal, pain, numbness, developments of lumps, leathery and wrinkled patches inside the mouth, or color changes to soft oral tissues are signs that you may have oral cancer. Difficulty with chewing, swallowing, speaking or moving your tongue or jaw are also noticeable symptoms.

Gum tissue can also be irritated and recede or pull away from teeth due to smokeless tobacco use. The risk of tooth decay is increased once the gum tissue recedes because it exposes the roots of the teeth. Discomfort may accompany eating or drinking because the roots become sensitive to hot and cold or other irritants like spicy foods.

Tooth decay is also increased by the sugars used to enhance smokeless tobaccos, which contains sand and grit which wear down the teeth. Concavities on the facial surfaces can occur from these products as they abrade the surfaces of the teeth.

If you have any of these signs, you should see your dentist immediately.

Even new users of smokeless tobacco are likely to experience mouth sores, bad breath, and yellowish-brown stains on their teeth. With repeated use, there are even more problems such as bleeding or cracked lips, and eventual tooth loss due to receding gums.

The greatest concern for smokeless tobacco users is oral cancer, one of the most devastating forms of cancer. The quality of life for oral cancer survivors is significantly negative. Effects of oral cancer include:

The risk of developing oral cancer is the same as smokeless tobacco as it is with cigarettes.

Besides oral cancer, some studies have suggested a link between smokeless tobaccos and the development of stomach cancer, esophageal cancer, and pancreatic cancer. 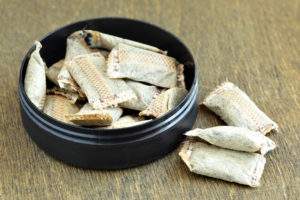 Other Risks of Smokeless Tobacco

Smokeless tobacco products put a strain on your immune system and make it much, much less capable of warding off disease and infection. These products, particularly snuff, can lead to gingival recession, especially in the presence of pre-existing gingivitis.

There are many other health issues associated with smokeless tobacco besides just oral cancer. Irregular heartbeats, high blood pressure, and increased heart rates are a few of the symptoms users will experience. These symptoms can put you at a higher risk of heart attacks, strokes, or brain damage.

Keratosis or leukoplakia can develop in the area of the mouth where tobacco is habitually held. It is a white patch and can be developed by all smokeless tobacco users, but snuff users are especially prone to development.

Snuff induced early keratosis is a translucent, filmy, ribbed white patch that becomes more opaque with increased use. Chewing tobacco-induced keratosis is similar but lacks the ribbed quality and is typically less common. A smokeless tobacco user being exposed to this lesion either through a photograph or through personal experience is a powerful intervention tool.

If smokeless tobacco use is stopped, then most early lesions are reversible. One study has shown that within six weeks of quitting smokeless tobacco keratoses are resolved. Irreversible ulcerations, thickenings, red areas, or white areas are indications that a biopsy is needed.

Your Dentist Can Help!

It’s important to keep your visits to your dentist regularly, especially if you have used or are currently using smokeless tobacco products. Making sure you practice healthy oral habits at home, along with regular check-ups, will help in the detection and prevention of many of these harmful side effects.

Stopping the use of smokeless tobacco products is the best way to lower the risk of developing any of these issues. There is no safe level of any type of tobacco use, no matter what form it is in.

There is help available to quit the habit of smokeless tobacco. The National Institute of Dental and Craniofacial Research sponser a program called? You Can Quit Spit Tobacco.? For more information visit www.nidcr.nih.gov

There is both local and online support available from the National Cancer Institute. They offer tools for both smokeless tobacco users and smokers to help quit. They have a smartphone application available for those wanting to quit and live online chat sessions with cessation counselors Monday through Friday.

If you have any questions about how tobacco products affect your oral hygiene and health, please don?t hesitate to call us! We understand the addictive qualities of smokeless tobacco and want to help keep your mouth as healthy as possible. For more information, please get in touch with us at Cooley D.D.S. today.

Do we know it?s important to take good care of your mouth, teeth, and gums for optimal oral health. Being diligent in brushing and flossing…

Read More
Recent Posts
Categories
Back to the top